My name is Harrison, everyone calls me Haytch, and I am 26 years old and have been dealing with Crohn's disease since my diagnosis at 21 years of age. Prior to my diagnosis I suffered with fistulas requiring many surgeries and am currently under the Alfred Hospital IBD clinic in Melbourne.

In March this year I married Casey and we have a beautiful little boy Ronnie and are expecting a daughter in early September. Casey and Ronnie motivate me every single day even when the pain and fatigue are debilitating.

Over the past 5 years there have been many ups and downs including persistent pain, 16 painful surgeries, chronic fatigue, opioid addiction and being judged by the numerous doctors due to my appearance. I feel now I am on the right medication and coming out the other side much more resilient and stronger.

My aim is to be the best father I can be, but also to get back into competitive basketball and doing all the normal day to day activities people take for granted. I want to get back into the work force (working with my father) to support my family and feel like I am contributing. Working with IBD can be difficult as the disease is very unpredictable and you never know how you will feel each day.

My aim in life is to inspire and help people with IBD to know that life does get better with the right treatment and mindset. For a long time I didn't think my quality of life would improve, but over time the medication begins to work and the continuous motivation from family and friends pushes me to be the best person I can be. Don't give up! 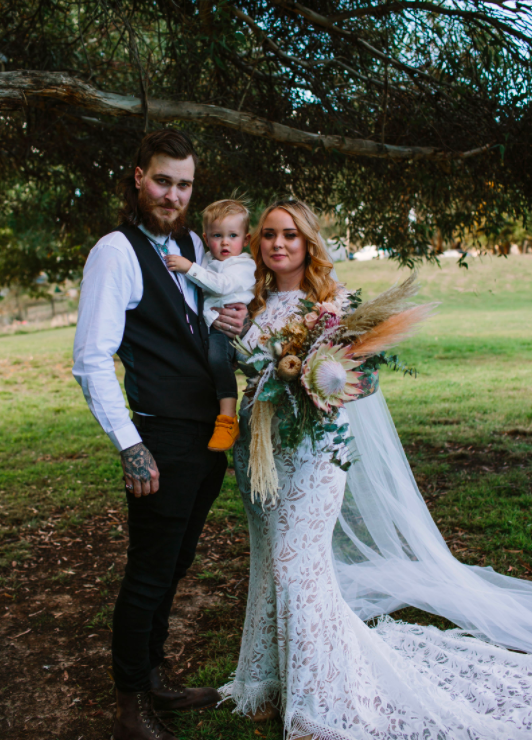 Having a chronic, lifelong illness didn’t register when I was initially told I had Crohn’s disease. I thought once I had my fistula surgery, I would be fine, but that wasn’t the case. It took two years and more than 10 surgeries before a name was given to my symptoms. It was a relief initially because I thought now I can get the medication to fix the fistulas. I was immediately approved for Humira injections and 6MP (Mercaptopurine) which made me very sick.

I’m happy I no longer have surgeries, but the side effects of these drugs caused a skin condition that took the skin off the soles of my feet, hands, and scalp. I lost all my hair within the first 4 months. I had my first child in that time, and it was terrible as I couldn’t hold him and was unable to help with bathing and looking after baby Ronnie. After another 6 months my skin began to heal, and my hair grew back thicker than ever.

Even with all the ups and downs of Crohn’s disease I feel that now I am on the best treatment. I will always have ongoing health conditions, but I know I need to accept that this is what it is and can only hope that by raising funds for more research a cure can be found for Crohn’s and colitis.

This September I will be recovering from having throat surgery, due to Crohn’s, as well as awaiting the birth of my second child in the first week of September. It would have been easy for me to skip this year, but it is important for me and our team, Haytch’s Heroes, to keep helping to raise funds for such an important cause.

Why is raising awareness about IBD important to you?

It’s hard for people to understand why I look okay on the outside but can’t work a full day or I can’t go out for dinner often. The more people know about this disease the more understanding people will be. Last year the Live Fearless Challenge allowed me to spread the message to all of my friends and beyond about how we live daily and the struggles we face with IBD. Many people had no understanding of what we go through and they supported me by donating their time and money to help raise much needed funds to help with research and support fellow IBD patients. I hope this year will be even bigger and better!

Any advice for your fellow fundraisers in chasing you down as the highest team fundraisers?

After doing the LFC for the past four years, last year we raised so much more money by getting more people to join our team. This way you reach so many more people and you spread much more awareness.

Do you have a message for your fellow Live Fearless Challenge participants?

Let’s raise awareness and funds to help more people living with this disease. This September my team, Haytch’s Heroes, will be walking for not only me but for everyone.